Every industry and workplace comes with its own set of potential risks, hazards and unique workplace risk culture. In some industries, it may be common to shrug off an injury or even avoid the proper procedure for reporting an injury if an accident does occur. Nevertheless, it’s crucial that your employees know how important it is that they report any and all injuries to management immediately for several reasons, regardless of which industry you’re in.

At first blush, this might be counterintuitive. Does the cost of the claim actually increase? Well, yes. Let’s unpack this.

Even a seemingly minor injury can become a major health issue in the long run. Interestingly, it is these less extreme injuries seem to be the real culprits when it comes to increased worker’s comp claims.

Here’s why: serious accidents are too big to ignore. They’re usually reported immediately, and the claims process is started right away.

Inversely, an injured employee might brush off a seemingly minor injury like a strain or a sprain and think, optimistically, that it might heal on its own. Unfortunately, these types of nagging injuries can get worse and worse if left untreated.

By the time the injured employee begins the claims process a couple weeks or even months later, the odds of making an accurate claim become slim. Making a simple claim about a when a minor injury occurred and whether or not it happened at work becomes a contentious battle. This is where the long, exhausting and expensive cycle of litigation begins.

According to the NCCI, attorneys become involved about 12% of the time an injury is reported on the day of the incident. This percentage more than doubles when a claim is made a month later. If you know anything about lawyers, you probably know that they’re breathtakingly expensive for both defendant and plaintiff. Prioritize reporting injuries early and often to avoid this type of costly litigation.

So, what’s the moral of the story here? Treat every injury like a major injury. Encourage your workers to report it immediately and assure them there won’t be any punitive actions or repercussions against them for doing so.

If dealing with pricey litigation and paperwork isn’t painful enough, an injury will undoubtedly cost you an arm and a leg in terms of productivity. Do you really want to constantly sink tons of your precious time and money trying to hire and train new employees to pick up the slack of the sick or injured ones?

It’s also worth mentioning that constant litigation can do irreparable harm to your company’s sterling reputation, which will make it harder to attract talent.

It’s every employer’s moral and legal obligation to protect their workers.

Ultimately, the best way to prevent increased costs resulting from late worker’s comp claims is to take a proactive approach to preventing injuries and illness and create a positive culture of workplace safety. Remind workers to report injuries as soon as possible and ensure that each job site has been regularly and thoroughly vetted for potential hazards and risks by a professional.

If you’d like an expert’s help making sure you’re meeting OSHA and industry standards, schedule a free workplace safety inspection with us today.

For more information on how much delayed workers comp claims can increase in cost, refer to the following infographic.

As an employer, you’re obligated to report injuries as soon as possible to insurance companies. Even if it’s just a minor injury, it’s important to have record of the incident in the event that the injury or health issue develops into something much worse. 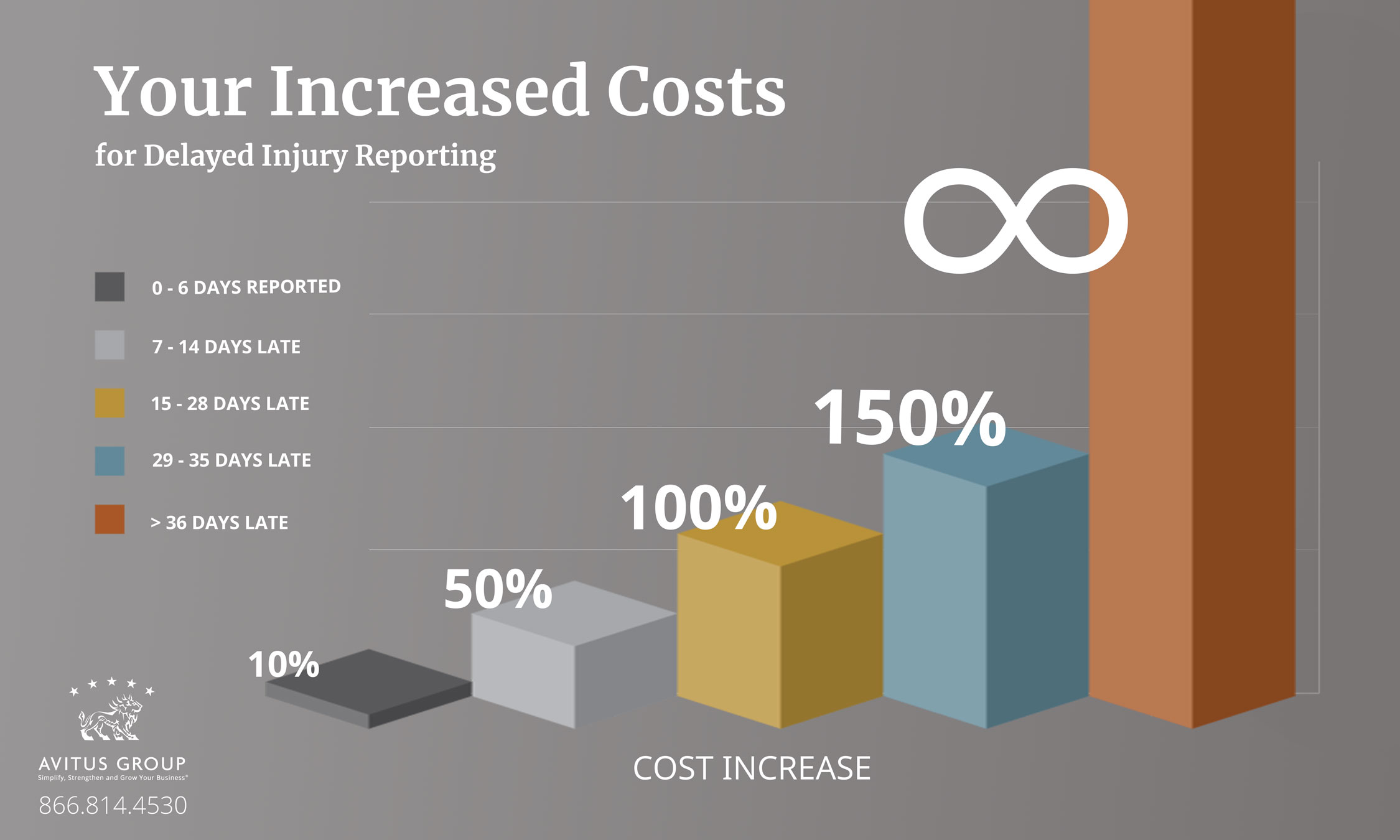